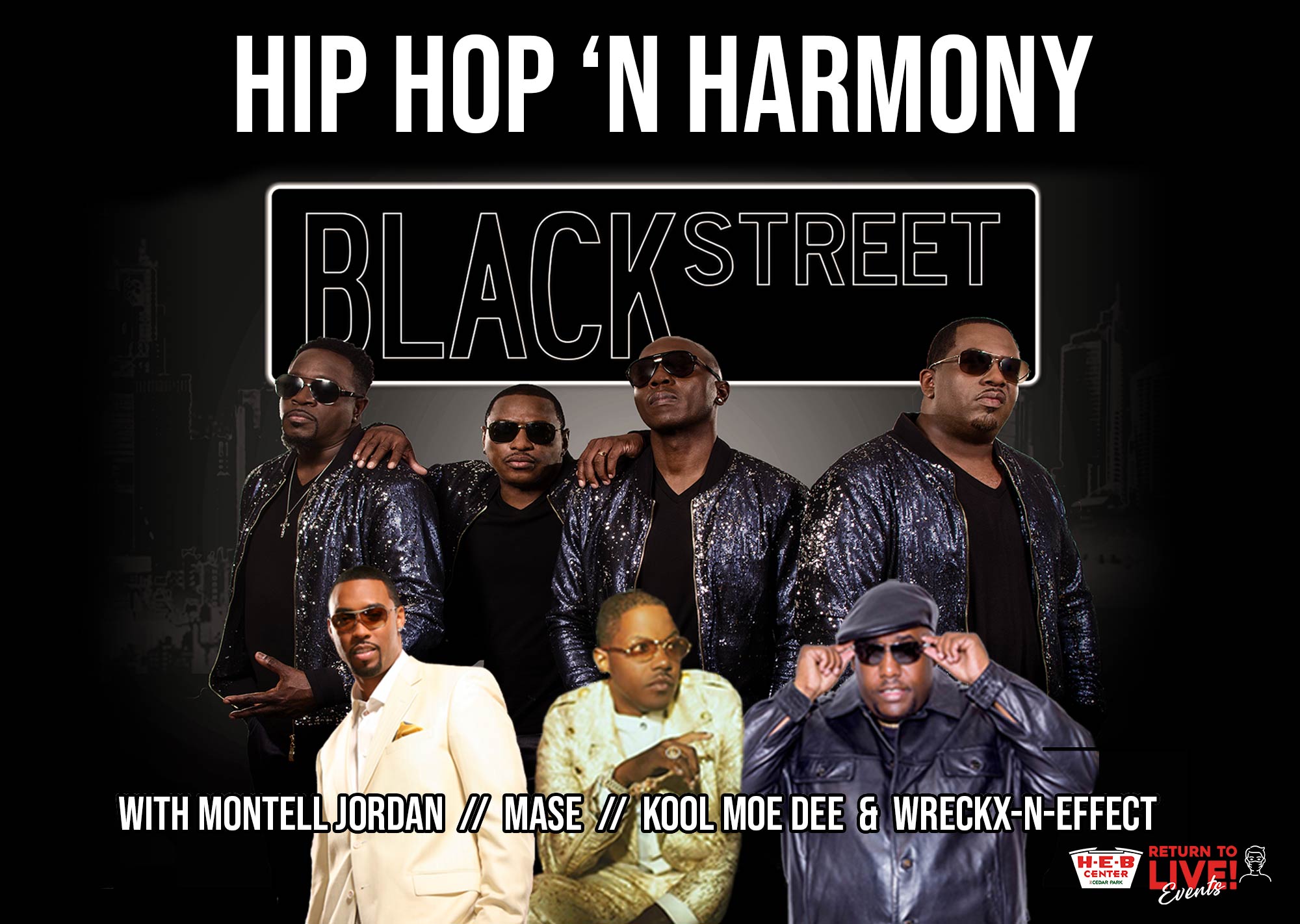 “Hip Hop ‘n Harmony”, originally scheduled for August 20, 2021 has been rescheduled to Thursday, March 10, 2022 at H-E-B Center at Cedar Park, featuring BLACKstreet with Montell Jordan, Mase, Kool Moe Dee and Wreckx-N-Effect. Tickets are on sale now at Ticketmaster.com and the H-E-B Center box office. All previously purchased tickets are valid on the new event date. For additional questions, contact the box office at 512-600-5001.

Blackstreet is one of the top Grammy award winning vocal groups of the '90s and still remains one of the top touring acts of the 21st Century. In 1993, their first single "Baby Be Mine" was released on the movie soundtrack to the Universal Pictures comedy CB4 (starring Chris Rock). Their debut album, Blackstreet, featured the singles "Baby Be Mine", "Before I Let You Go" and the co-written double platinum hit by Michael Jackson "Joy". "Joy" and "Before I Let You Go" were both Gold and Platinum Top 40 hits, with “Joy” and "Before I Let You Go" hitting the Top 10. In 1996, they released their sophomore album Another Level. It was a breakthrough success due to the top single "No Diggity" (with Dr. Dre), which was a No. 1 hit on the Billboard Hot 100 in November 1996. In 1998, Blackstreet won the Grammy Award for Best R&B Performance by a Duo or Group with Vocals. The Another Level album eventually went four times platinum in the United States and peaked at No. 3 on the Billboard chart. "No Diggity" was later ranked at No. 91 on Rolling Stone and MTV: 100 Greatest Pop Songs.

The Billboard Top Ten songs chart for 1995 contains the following names: Coolio, TLC, Seal, Boyz II Men, Mariah Carey, Madonna and a man named Montell Jordan. This Is How We Do It was a breakout new jack-swing song that topped the Hot 100 for seven weeks and R&B charts for eight. Jordan, tall and handsome with a silky-smooth voice, established himself as a powerful presence in music, brimming with talent, savvy and charm. Over his nearly twenty year career in music, Jordan has released seven studio albums, fourteen singles, and is a Grammy nominated artist selling more than 10 million records worldwide.

*This event date is subject to CDC, State of Texas and local government guidelines for helping the community stay safe during the COVID-19 pandemic.